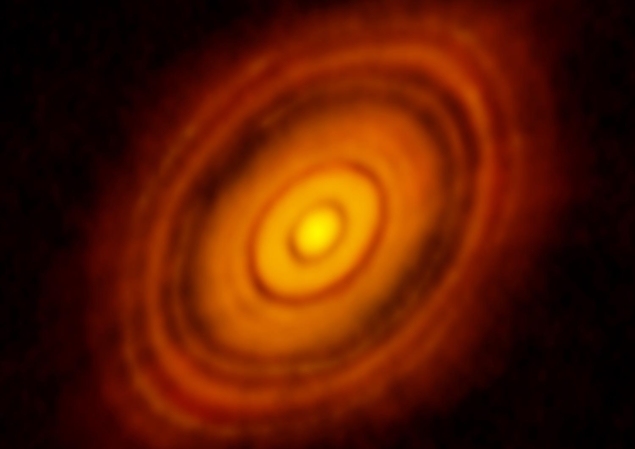 The clear divide between the inner and outer solar system is the legacy of a ring structure that existed a very long time ago in the planet-forming disc that surrounded the Sun. That is the conclusion of Ramon Brasser at Tokyo Institute of Technology and Stephen Mojzsis at the University of Colorado Boulder, who have combined computer simulations of Jupiter’s formation with observations of the discs surrounding young stars.

The solar system is clearly divided between the inner rocky planets and asteroids, and the outer gas giants – with the border between the two regions lying between Jupiter and the asteroid belt. This difference can be quantified in terms of carbon – with the element being much more abundant in the outer part of the solar system than it is in the inner rocky planets and asteroids. The difference is so stark that astronomers now widely believe that material in the newly-formed Sun’s planet-forming circumstellar disc was similarly divided in terms of its composition.

However, Brasser and Mojzsis claim to disprove this hypothesis in their study. Through simulations recreating the conditions of the early solar system, they showed that Jupiter would not have accreted mass fast enough to create such a significant barrier.

For an alternative explanation, the duo looked to observations made by Chile’s ALMA telescope, which has observed a rich variety of ring structures in the circumstellar discs of many young stars. They propose that similar rings were likely to have existed around the Sun as the planets were forming. If so, they could have created regions of high-pressure gas and dust which would have been difficult, though not impossible, for carbon-rich objects to cross. If these ring structures lasted long enough, Brasser and Mojzsis argue that they could have fundamentally altered the structure of the solar system, preventing today’s terrestrial planets from acquiring more matter to become giants. They also believe that other high-pressure rings are likely to exist further out in the solar system, and that the gas giants may have formed as they fell into the lower pressure sinks that lay between the rings.

Ultimately, their work suggests the need for a fundamental rethink of Jupiter’s role in the solar system’s characteristic distribution of carbon. With the diversity of observations of circumstellar discs gathered by ALMA, they could also help astronomers to learn more about the formation of star systems other than our own.

The research is described in Nature Astronomy.