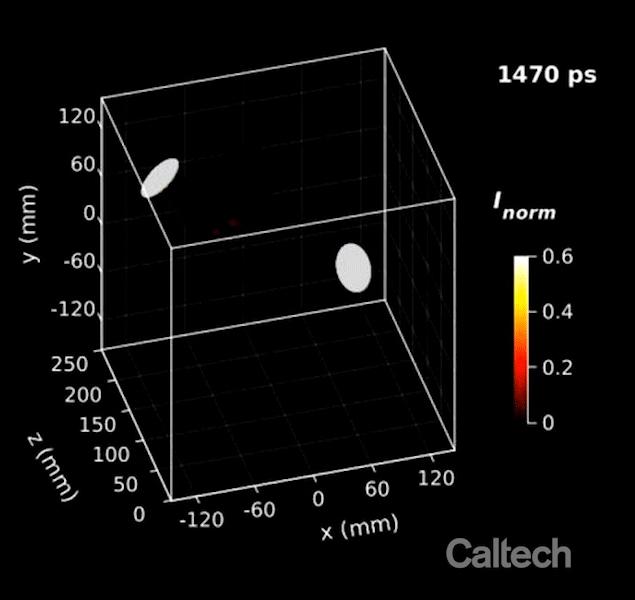 A new camera that takes videos at record-breaking speeds of up to 100 billion frames per second in 3D has been demonstrated by researchers at the California Institute of Technology in the US. The feat was made possible by a technique known as single-shot stereo-polarimetric compressed ultrafast photography (SP-CUP), and it builds on the group’s earlier work – including a camera that takes images at 70 trillion frames per second, which is fast enough to see light travel. The latest device could prove important for biomedicine, agriculture, electronics and other fields that rely on fast, high-dimensional optical imaging.

In order to image processes that take place at the speed of light, researchers need frame rates at the level of one billion frames-per-second (Gfps). This is way beyond the readout speed of even the most advanced charge-coupled (CCD) devices and complementary metal oxide semiconductor (CMOS) sensors used in most modern ultrafast photography. While sub-nanosecond frame interval devices have been developed, their low sequence depth (that is, a low number of frames captured per acquisition) means that they cannot be used to image luminescent and colour-selective objects such as distant stars and bioluminescent molecules.

Imaging high-speed processes in multiple dimensions poses additional challenges. Most high-dimensional optical imaging systems acquire data by scanning – that is, they capture either a one-dimensional (1D) column or a two-dimensional (2D) slice of an object in separate measurements. By combining a series of such measurements, these systems can build up higher-dimensional images of the object. This approach has its drawbacks, however, with the main one being that successive measurements in the series need to be very precise for the multidimensional picture to “stitch together” properly.

To overcome this (and other inherent problems), imaging specialists have turned instead to single-shot high-dimensional CUP optical imaging techniques. This form of image acquisition operates in parallel, and it has improved the efficiency of CUP to such an extent that an offshoot known as single-shot temporal imaging is creating a flurry of interest in the optical imaging community. Using this technique, it is possible to capture a photon’s time of arrival without repeated measurements – a hitherto hard-to-achieve feat that could help scientists better understand fleeting phenomena in physics, chemistry and biology that are difficult or impossible to reproduce.

The single-shot stereo-polarimetric compressed ultrafast photography (SP-CUP) technique developed by Lihong Wang and colleagues combines many of these previous techniques into a single device. The combination of compressed sensing, streak imaging (a traditional 1D ultrafast imaging approach), spectroscopy and polarimetry produces a single-shot passive ultrafast imaging device that can capture non-repeatable phenomena evolving in 5D (three spatial dimensions, plus time and ψ, the angle of the linear polarization of reflected light) with picosecond temporal resolution.

In Wang’s view, his team’s new camera “sees” more like humans do. “When we look at the world around us, we perceive that some objects are closer to us and some further away,” he explains. “This depth perception is possible because our two eyes each observe objects and their surroundings from a slightly different angle. The information from these two images is combined by the brain into a single 3D image.” Why ultrafast detection is ultra-good

The SP-CUP device works in essentially the same way, and like humans, it sees in stereo. “While the camera does only have one lens, it functions as two halves that provide two views with an offset,” Wang says. “Two channels in the device mimic our eyes.” In addition, he notes that his group’s camera has an ability that no human possesses: it can sense the polarization of light waves.

Wang believes that the SP-CUP’s combination of high-speed three-dimensional imagery and the use of polarization information makes it a powerful tool that may be applicable to a wide variety of scientific problems. One area of particular interest is the physics of sonoluminescence, a phenomenon in which sound waves create tiny bubbles in water or other liquids. As the bubbles rapidly collapse after forming, they emit a burst of light.

“Some people consider this one of the greatest mysteries in physics,” Wang says. “When a bubble collapses, its interior reaches such a high temperature that it generates light. The process that makes this happen is very mysterious because it all happens so fast, and we’re wondering if our camera can help us figure it out.”

Full details of the research are reported in Nature Communications.