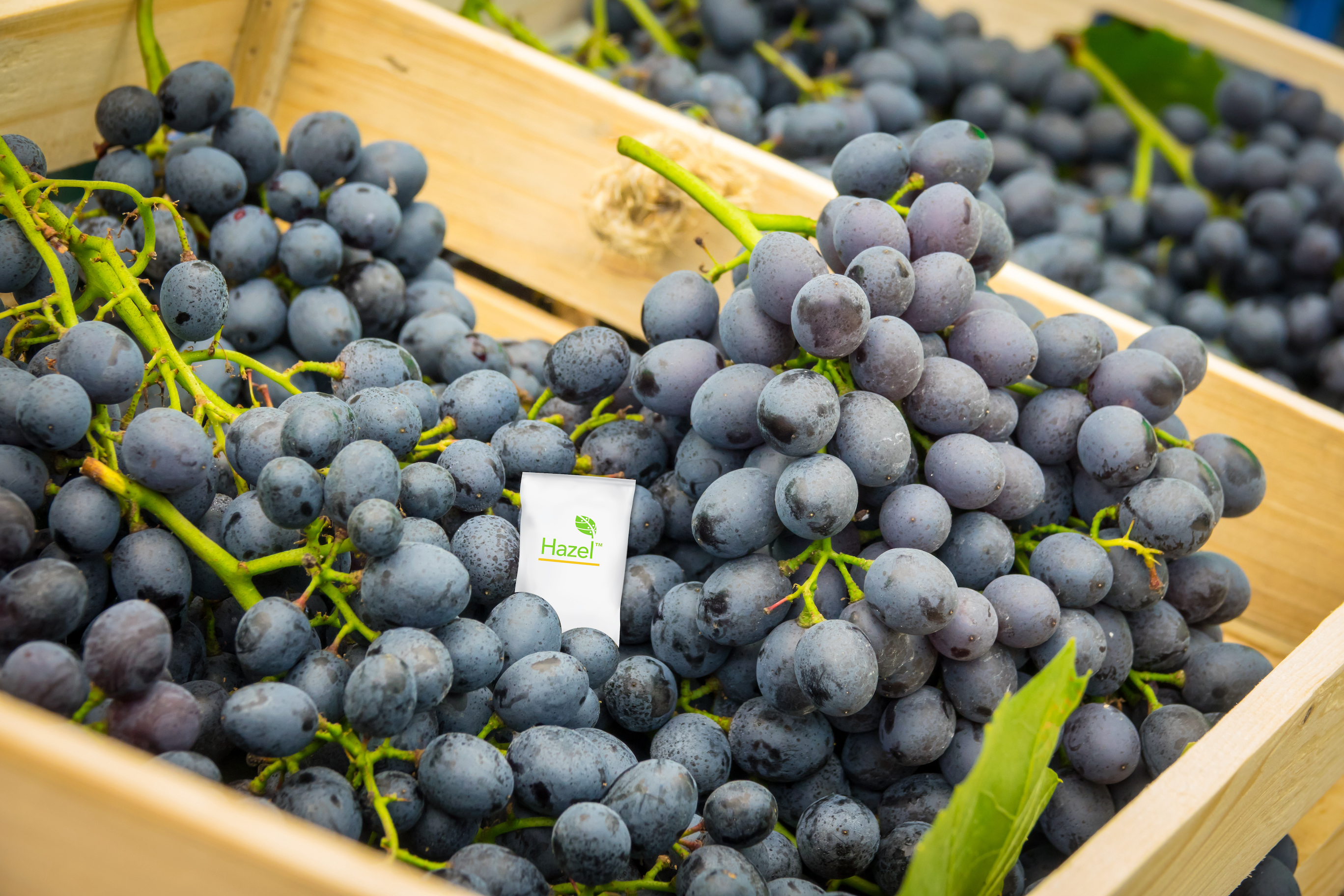 In 2017, Hazel Technologies was a plucky young startup with enough scientific success to raise $800,000 in seed funding and score a $600,000 development grant from the U.S. Department of Agriculture. In late 2020, the company is finding early commercial success in its mission to decrease food waste through its innovative packaging.

Hazel creates packaging inserts, or satchels, that release ethylene inhibitors and other natural chemicals to slow down the ripening process of many fruits and vegetables. In the past three years, the company has expanded its product line from inserts for tropical fruits such as guava, starfruit and avocado to specialized ones for berries, grapes, plums, broccoli and others. Now, Hazel is in the process of developing commercial pilots in the meat and other protein aisles.

Hazel CEO Aidan Mouat said the technology is flexible enough to be optimized for a specific customer’s crop and location while also powerful enough to delay ripening by five to 10 days for many fruits and vegetables.

“We have one production line in which we make the necessary technical adjustments on a crop-by-crop and sometimes even on a country-by-country basis to achieve the end result that we’re aiming for,” Mouat said. “In a way, we’re trying to standardize the shelf life using a single unifying technology platform.”

If you tell any retailer, ‘Hey, I can give you two to three days of added time to sell through fruits,’ that’s a game-changer.

The key is Hazel’s time-release technology, according to the company. Hazel’s satchels contain 1-methylocyclopronene (MPC) inhibitors to slow down ripening. But in many fruits such as avocados, the ethylene receptors are replaced every 24 hours, so a one-shot application doesn’t work. The packets treat the fruit over time to continually put the receptors to sleep and slow down ripening.

Hazel said its technology’s ease of use sets it apart from approaches offered other competitors. While coating technologies such as those made by Apeel Sciences have to be applied to each fruit, Hazel’s customers simply toss the baggies in the boxes with the produce, noted the company’s early customers.

“The customer shouldn’t have to interact with the technology,” said Patrick Cortes, senior director of business development at Mission Produce, one of Hazel’s clients. “If they do, we’ve lost. Educating the consumer on interacting with a technology that’s extending shelf life is going to be pushing water up the hill.”

Hazel’s new products are breaking barriers in new categories. Grapes, which don’t ripen once picked, weren’t thought to be affected by MPC inhibitors. But Hazel’s customer Oppy, a grower/shipper of berries, grapes, apples and pears from Chile and Peru, saw a profound effect on an often overlooked but important area: the grape’s stems.

“The stems arrive much greener and hydrated. Much less dry. And we also see less shrivel on the grapes themselves,” said Garland Perkins, senior manager of insights and innovation at Oppy. “If [a retailer] sees grapes that look like they have a dry stem, they’re going to reject them.”

Those rejections usually end up in the trash. Hazel also helped Oppy with the Italian Gold Kiwi. Shipped the traditional way, the fruit was arriving with very low pressure — indicating a riper fruit, meaning the retailer had to sell the fruit quickly. According to Perkins, after applying Hazel, the fruits started coming in with higher pressures, giving grocery stores more flexibility about how long to keep them on their shelves.

“A lot of times with sustainability, it needs to make sense from a business perspective,” she said. “In a lot of cases, no one can make sustainable efforts that aren’t also very good on the bottom line.”

Hazel promises an improved product and customer experience, fewer rejections from retailers, a higher-quality product that can be priced higher and less waste along the way. But if less produce is going bad and more is lasting longer, there’s an inherent dichotomy at play for suppliers that could eat into their profits. The longer their fruit lasts, the less consumers and retailers need to buy.

“There’s an old adage in produce that one of the best sales tools you have is the dumpster,” Cortes said. “That’s an archaic way of looking at it. Because while that’s the easy way, I think the better way is to give customers a better and more positive experience. That’s going to drive more demand.”

Mission Produce consistently has been able to extend the shelf life of a ripe fruit by two to three days with Hazel, Cortes said. Bill Purewal, founder of PureFresh, and Christopher Gonzalez, vice president of sales at WP Produce, also report extended shelf lives of their produce by 20 to 30 percent after using Hazel. The extensions have allowed both companies to ship to farther away destinations such as the East Coast, and allowing some operations to think about shipping to Europe and Asia.

I think the industry became very critically aware that it needs more technologies like ours, not just that are sustainable and enhance shelf life but are operationally flexible …

“If you tell any retailer, ‘Hey, I can give you two to three days of added time to sell through fruits,’ that’s a game-changer,” Cortes said.

2020 wasn’t a normal year for anyone, especially retailers. Growers and shippers such as PureFresh needed innovative ways to help adjust to the massive changes in demand caused by the pandemic.

“We were worried we would pack all this fruit and it [would] not be able to go anywhere,” Purewal said. “It would just sit in our cold storage because we didn’t know what the demand was going to be lighter.”

At the start of the pandemic, fruit was moving very slowly through the supply chain, he said. So Purewal decided to spend a little more money on a technology such as Hazel to elongate shelf life and protect the fruit against the pandemic’s supply-chain disruption.

That investment also has long-term implications. Mouat insists climate change was a much bigger threat to the produce industry than the pandemic this year. According to him, for example, the U.S. plum crop was one-tenth the volume compared to last year due to warmer temperatures and wildfires.

“We’re here to help,” he said. “I think the industry became very critically aware that it needs more technologies like ours, not just that are sustainable and enhance shelf life but are operationally flexible, because trying to constrain operations to fit certain types of packing motifs or certain types of distribution motifs is going to become more challenging as things continue to change.”