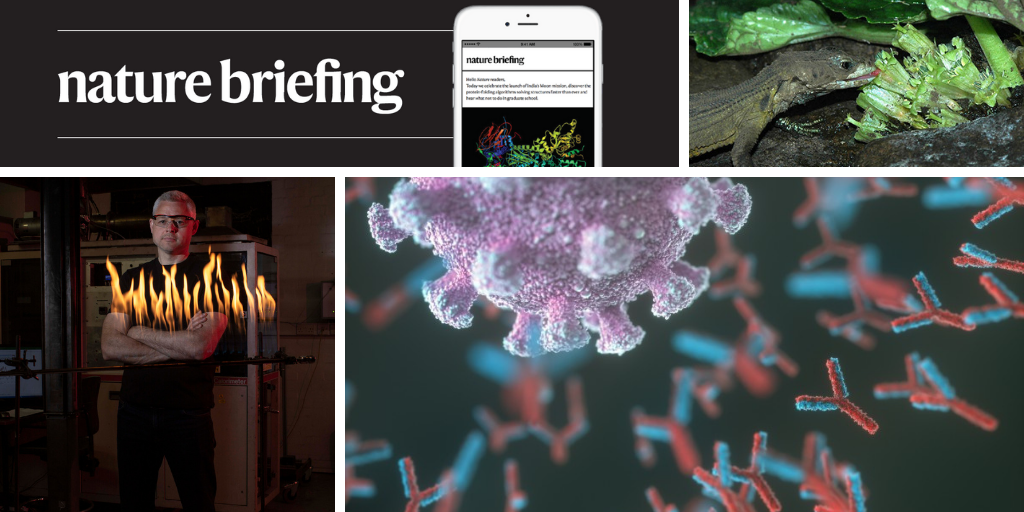 Late one night, while downloading data from camera traps over beers, researchers in South Africa saw a Drakensberg crag lizard (Pseudocordylus subviridis) visiting a Guthriea capensis flower, commonly known as ‘the hidden flower’. Over the next few days, they captured more footage of the lizards sticking their snouts deep into the flowers for nectar. The scientists had discovered the second known plant to use reptiles as its primary pollinator, and the first to do so in Africa. “A lot of science is a slog. But moments like this make it all worthwhile,” says plant scientist Sandy-Lynn Steenhuisen.

Machine-learning systems are chipping in to help archaeologists to pinpoint possible finds and thwart illegal trade in artefacts. Among their tasks are trawling satellite images for the circular stone tombs left by ancient Scythians across the vast Eurasian steppes, classifying countless Roman pottery fragments and searching the Internet for unlawful sales of human bones.

As COVID-19 restrictions continue to upend plans for data collection, scientists stuck at home are finding innovative ways to adapt their research questions. Seven junior researchers share how they modified their field-based research projects during the pandemic and offer their advice. “Although COVID-19 has been a big blow to researchers and academic work, it’s prompted me to develop different approaches and to think more broadly about my research,” says microbiologist Alexander Kwarteng.

Scientists at the Borexino solar neutrino experiment, located underground at the Gran Sasso National Laboratory in Italy, have blasted past a milestone in neutrino physics. They have detected, for the first time, neutrinos produced by one of the two types of fusion that power the Sun — the carbon–nitrogen–oxygen (CNO) cycle. (The other is the proton–proton (pp) chain.) Produced deep in the core, neutrinos emitted by the CNO cycle are the only direct probe of the deep interior of the Sun. Physicists spent 20 years perfecting the experiment, which had to be painstakingly purified to remove any natural radiation that could interfere with its measurements, spokesperson Marco Pallavicini tells the Nature Podcast. “The core of Borexino is probably the least radioactive piece of matter on the planet — maybe in the Universe actually,” he says.

Subscribe to the Nature Podcast on Apple Podcasts, Google Podcasts or Spotify.

Photos of sunsets are already a human obsession — ‘sunset’ is the single most common tag on the photo-sharing website Flickr, notes author Lauren Ring on her inspiration for the latest short story for Nature’s Futures series. What would be the value of such images in an underground future in which we never see the Sun for real? Prompted by her experience of lockdown, Ring explores our ability to find beauty and hope in a difficult present.

Andrew Robinson’s pick of the top five science books to read this week includes book-burning through the ages, the Arctic laid bare, and capitalism under scrutiny.

Structural engineer and fire-safety researcher Luke Bisby stands behind a ‘fire sword’ — a stainless-steel pipe with holes to vent propane gas. It allows his team to wield fire in a controlled way to study the properties of engineered-timber buildings. “Ultimately, we’re studying fire to prevent tragedy,” says Bisby. “That image of a kid holding a stick in a campfire until it catches, pulling it out until it stops burning and then plunging it in again? That’s fundamentally the question we’re studying in timber buildings: how much heat is too much?” (Nature | 3 min read)

Physicist Roger Penrose reflects on his twistor theory, which has yet to catch on in the physics community. (The TLS)