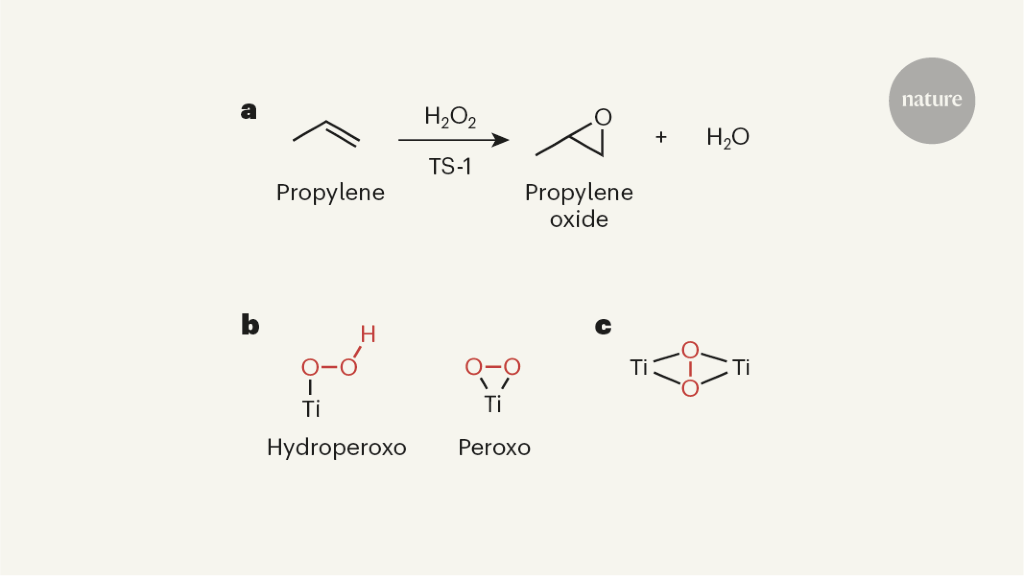 Metal ions trapped in crystalline microporous solids known as zeolites are promising solid-state catalysts for a wide variety of oxidation reactions1–3. In the past few decades, there has been intense research into the structure and nuclearity (the number of metal ions) of the active sites in these zeolite-based catalysts4,5. Despite these efforts, there is still no agreement on the nuclearity: the proposed number of metal ions in the active sites ranges from one to three1,2,4,5. Writing in Nature, Gordon et al.6 propose that there are two titanium ions in the active sites of a well-characterized industrial zeolite catalyst called titanium silicalite-1 (TS-1), challenging the widely accepted idea that there is only one. Their work has implications not only for TS-1, but also for other metal-containing zeolites for which the structure of the active sites is not yet fully established.

TS-1 has a rich scientific and industrial history3,7. It started with the seminal work3 of industrial researchers in the early 1980s, who prepared it by partially replacing silicon atoms with titanium atoms in a zeolite that has a particular type of porous structure (the MFI structure). They found that TS-1 catalyses several oxidation reactions, most notably the epoxidation of propylene (H3CCH=CH2) — a reaction in which an oxygen atom in hydrogen peroxide (H2O2) is added to propylene’s carbon–carbon double bond (Fig. 1a). The product of this reaction is propylene oxide, a compound widely used to manufacture the building blocks of polyurethane plastics. This initial work spurred further industrial interest, and led to the use of TS-1 as a catalyst for the commercial production of propylene oxide8.

The structure, composition and performance of TS-1 have been investigated in great detail, with the aim of making catalysts that are more active and stable than existing ones for a range of oxidation reactions, and which promote the highly selective formation of targeted products. On the basis of a wide variety of characterization methods, there has been a general consensus about the type of active site needed to activate propylene for epoxidation, and about the reaction intermediates involved in the process9,10. More specifically, the active site has been thought to be mononuclear — that is, to contain a single titanium ion. This ion is presumed to activate hydrogen peroxide, leading to the formation of an intermediate peroxo (O–O) or hydroperoxo (HO–O) species (Fig. 1b), which then reacts with propylene to form propylene oxide. Gordon et al. now bring fresh evidence to the table. They have studied the active site of TS-1 using a spectroscopic technique called solid-state oxygen-17 nuclear magnetic resonance (17O NMR), in combination with a battery of other analytical techniques and computational modelling. The authors synthesized a set of catalytically active TS-1 materials that had different amounts of titanium incorporated, and reacted them with hydrogen peroxide in which both of the oxygen atoms were oxygen-17 (a rare, heavy isotope of oxygen). Interestingly, the spectroscopic signature of the reaction intermediates observed using 17O NMR was similar to that seen for the Berkessel–Katsuki catalyst — a soluble titanium catalyst that also promotes epoxidation reactions, and which has a dinuclear active site (that is, the active site contains two titanium atoms)11,12. This observation suggested that the active sites in TS-1 are also dinuclear.

The authors used computational modelling to calculate the 17O NMR spectra of titanium species that could form in TS-1 on reaction with hydrogen peroxide. This confirmed that the observed 17O NMR spectrum is probably produced by a dinuclear species. Taken together with experimental evidence obtained using two other spectroscopy techniques (ultraviolet–visible diffuse reflectance spectroscopy and Raman spectroscopy), the researchers conclude that the active sites in TS-1 consist of a peroxo species sandwiched between two titanium ions (Fig. 1c).

Gordon and colleagues also used computational modelling to assess whether dinuclear titanium sites in TS-1 can activate propylene for epoxidation in the presence of hydrogen peroxide. This showed that the modelled dinuclear site does indeed promote a favourable reaction pathway for propylene epoxidation, thereby confirming that such sites are plausible candidates for the catalytic centres in TS-1. The authors’ data are convincing, but it should be noted that metal-containing zeolites are highly complex and intrinsically heterogeneous: TS-1 could contain several types of titanium species, depending on the exact conditions used to synthesize it. Such species could either be defects in the molecular framework of the zeolite, or be extra-framework species. And they might be present in minute amounts that would escape detection by some analytical methods. Furthermore, TS-1 could contain small clusters of titanium oxides, which could complicate spectroscopic analysis.

More experimental and theoretical evidence is therefore needed to confirm that the active sites in TS-1 are dinuclear, rather than mononuclear, as had been widely accepted. This is especially important given that TS-1 active sites have previously been proposed to be dinuclear13,14. That proposal was based on a study of TS-1 carried out using a spectroscopic technique called extended X-ray absorption fine structure (EXAFS), but was eventually rejected on the grounds that a peak in the EXAFS data had been interpreted erroneously15. In view of Gordon and colleagues’ findings, the EXAFS data for TS-1 require proper re-evaluation, and even further exploration using more-advanced analytical methods. Another technique that could be used for further studies is atom-probe tomography, which could identify specific pairs of titanium atoms in TS-116.

It should also be noted that the conditions used in Gordon and co-workers’ analytical experiments differ from those used in epoxidation reactions with TS-1. This raises the possibility that the active site reorganizes during reactions. Experiments that characterize the active sites in situ during epoxidation reactions might therefore help to settle the debate about their structures.

Nevertheless, the current work is exciting and has several broad implications. For example, it shows that chemists studying solid-state catalysts can learn much from studies of homogeneous (soluble) catalysts — an adjacent field that has its own debates about the molecular structure and nuclearity of active sites. Gordon et al. also introduce the use of 17O NMR as a powerful method that could be used to characterize a wide variety of industrial zeolite catalysts. More specifically, it would be advantageous to use 17O NMR to investigate the nuclearity of active sites in zeolite ZSM-51,2. This is a catalyst that has the same MFI structure as TS-1, but which contains aluminium instead of titanium atoms, and is loaded with copper or iron to produce catalysts for the selective activation of methane or benzene.