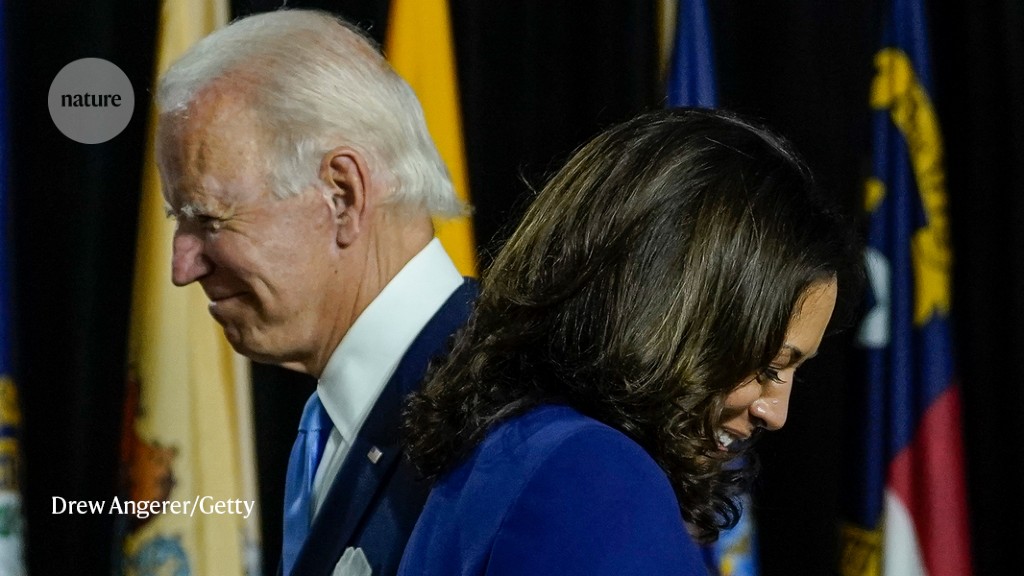 US president-elect Joe Biden must quickly restore science to government

After four years of daily hammer-blows to the foundations of government, democracy and evidence-based policy, a majority of US voters have rightly decided that enough is enough, and have embraced a future of hope, truth, decency, evidence and science.

The election of Joe Biden and Kamala Harris as the next president and vice-president of the United States provides a welcome glimmer of hope in a year dominated by the tragedy of the coronavirus pandemic.

The country, and the world, can begin to close the door on four years of chaos, catastrophe, incompetence and the normalization of false information from the holder of the United States’ highest public office. In a Nature poll run since the election result was announced, more than 75% of respondents said they are optimistic about the results.

As expected, President Donald Trump continues in his refusal to accept the result, but we are confident that the rule of law will prevail and that his term of office will end, as it must, on 20 January 2021.

When this journal endorsed Biden’s candidacy for president of the United States, we did so in part because of his campaign pledges to restore the place of science in government and to return the country to its previous international commitments. Within days of the result being called for Biden and Harris, the incoming administration declared that the United States will rejoin the 2015 Paris climate accords and reverse Trump’s dangerous decision to exit the World Health Organization (WHO). In our poll, Nature readers expressed support for these priorities — and hoped that the administration would appoint a science adviser and do more to support pandemic science.

We are confident that Biden, Harris and their team will respect the need for, and integrity of, regulatory agencies, and that they will quickly roll back restrictions on visas for international students and researchers imposed by Trump’s administration. Policies that adversely targeted women, people of colour, refugees and migrants, members of sexual and gender minorities, and people from other under-represented groups must also be erased, for good.

Biden’s immediate domestic priority must be to take personal charge of a fast, comprehensive and evidence-based effort to contain the coronavirus and protect the US population’s health. The Centers for Disease Control and Prevention must be brought back from the sidelines, moving it to the centre of the coronavirus response.

On 9 November, Biden’s transition team announced that it would be setting up a new coronavirus task force. This is welcome, but the incoming administration must also quickly find a message that resonates with Trump supporters, especially those who followed the outgoing president in refusing to accept expert public-health advice. Such national reconciliation is needed for many reasons — not least because the virus will not be contained unless the whole country accepts what it takes to defeat it.

During the campaign, Biden was transparent about the reality of the threat facing the US public. SARS-CoV-2 is not going away; it is dangerous and virulent, and researchers are just starting to study its long-term effects. The Biden–Harris team must continue to reinforce evidence-based public-health messages on the need for mask wearing, social distancing and hand washing.

And the incoming administration must work constructively with cities and states — as the Trump administration should have, a long time ago — to accelerate and expand test–trace–isolate programmes where these can help to contain the virus. This would follow best practice for controlling outbreaks of infectious disease, backed up by evidence from previous outbreaks and from those countries that are managing the COVID-19 pandemic more capably.

Furthermore, the United States must swiftly return to working productively with international coronavirus initiatives to ensure that vaccines are distributed equitably to those who will need them most around the world. In particular, it must cooperate with COVAX, a fund spearheaded by Gavi, the Vaccine Alliance, and the Coalition for Epidemic Preparedness Innovations.

The international community can now look forward to the prospect of a more unified response to COVID-19 — and to other diseases, too. De-funding the WHO was especially dangerous for low-income countries that rely on the agency to maintain standards of public-health infrastructure and tackle killer diseases. In addition to the COVID‑19 pandemic, the WHO’s epidemiologists, clinicians and logistics personnel are right now overseeing more than 35 emergency operations, including those to tackle a measles outbreak in the Democratic Republic of the Congo and a cholera outbreak in Yemen.

Back on the climate track

As Biden and Harris have made abundantly clear, climate change will be an urgent priority for the new administration, both at home and on the international stage. The United States hasn’t just lost four valuable years in helping to avert the coming climate crisis: it has regressed. It will take time for the new administration to reinstate — and ultimately strengthen — climate policies rolled back under Trump. Reaching net-zero emissions is a global challenge, and US participation in the Paris climate agreement will be crucial to achieving this.

That said, the Democrats have not yet achieved a majority in the Senate — and it is unclear whether they will. Without that majority, accelerated action on climate will be tough. Biden will need all of his nearly five decades of political experience in reaching out to opponents.

Biden has promised a green industrial revolution: he campaigned on a US$2-trillion plan to invest in low-carbon energy and infrastructure as part of a national effort to eliminate emissions from electricity by 2035 and achieve net-zero carbon emissions by mid-century. To implement this, Biden and Harris will need to draw on their joint experience at tackling vested interests — notably the powerful fossil-fuels lobby, and Biden will need to revive the spirit of the coalition that found success in Paris. The prospect of ambitious climate action from the United States, China, the European Union, Japan and South Korea will send a powerful signal to the broader international community that there can be no more delays in acting.

The new administration will also have to work with Congress to agree on the next injection of government spending to support the economy during the pandemic. That, too, will require working with members of the opposition and persuading them that there is neither sense nor fairness in supporting industries that endanger the climate, along with people’s well-being and health, when they could be supporting greener industries and creating the jobs of the future. The science more than justifies faster climate action, but Biden, Harris and their colleagues will need to make the case on economic and public-health grounds, too.

All of these measures will require smart and capable appointments. Experienced and qualified leaders in research, policy, public health, ethics and regulation must take their places at the Food and Drug Administration, the National Oceanographic and Atmospheric Administration and the Environmental Protection Agency. The credibility of these and other federal agencies has suffered hugely under the Trump administration, with very real consequences for public trust in the government and, ultimately, for our health and our planet. That cannot change soon enough.

The election result has boosted hopes for a new era in which scientific integrity is restored to US government and policies are based on fairness, science and the consensus of evidence, a commitment to unite and a determination to work towards the common good.

These values must also underlie the incoming administration’s relationships with other countries. The United States is a powerful nation whose influence extends well beyond its borders, both for good and for ill. The Trump administration’s policies on climate, the coronavirus and immigration have been a calamitous example of the latter. Biden and Harris have an opportunity to reverse course, rebuild relations with the international community and make the United States into a force for good.

The past four years amounted to a high-voltage electric shock for US institutions of democracy, including its much-admired scientific and health advisory systems. Nearly half of voters in a scientifically advanced nation chose a president who repeatedly rejected the advice of his own science advisers. Scientists and scientific policymakers must learn lessons from this about how to engage with the public. Colleagues from across disciplines must work together in a spirit of mutual learning to self-reflect and understand how they can all do better.

The new administration has a mountain to climb, and it knows it. Considering the magnitude of national and global emergencies, there is no time to lose. The work starts now.