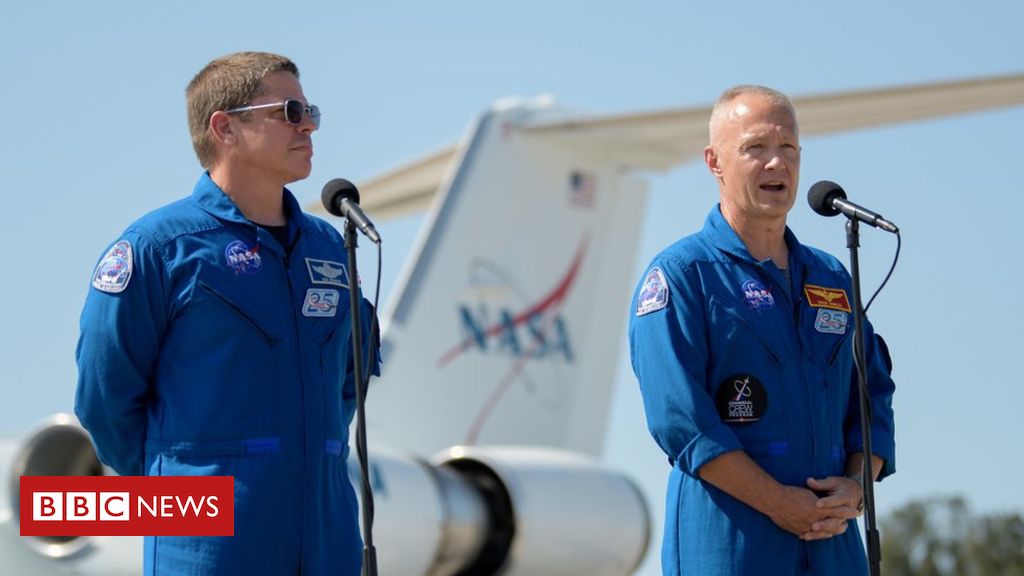 Nasa astronauts Doug Hurley and Bob Behnken have arrived at the Kennedy Space Center in Florida to prepare for their historic mission next week.

The pair's flight to the International Space Station (ISS) will be made in a rocket and capsule system provided by a commercial company, SpaceX.

Nasa has traditionally always owned and operated its space vehicles.

But that is a capability it gave up in 2011 when it retired the last of the space shuttles.

The agency now intends to contract out all future crew transportation to low-Earth orbit.

Hurley and Behnken flew into Florida from the agency's human spaceflight headquarters in Texas where they have been in quarantine.

They'll continue protecting their health at Kennedy as they get ready for Wednesday's planned lift-off.

Their rocket, a Falcon-9, and capsule, known as Dragon, will be wheeled out to the spaceport's famous launch pad - complex 39A - in the next few days for its static fire test.

This will see the Falcon ignite briefly all nine of its first-stage engines to check they are fit to go.

Hurley and Behnken, together with ground-support staff, will also conduct a "crew dry dress" rehearsal.

This will involve the men suiting up, riding out to the pad and even climbing into their capsule as a dummy run to ensure everyone understands their role.

Of the Dragon, Hurley said: "It's just an amazing vehicle. It's definitely not the space shuttle. It's much smaller; it's a capsule. It's state-of-the-art from a technology standpoint, and we are so excited to be in a real spaceship and not the simulator here in just a week."

Behnken said the pair felt the weight of history. This is only the fifth time American astronauts will have flown to orbit in a brand new spacecraft design.

"We certainly take inspiration from all those who've come before us. Whenever we've had a chance to speak with the astronauts who had those opportunities - the thing they've emphasised is, in the moment, being as prepared and ready for whatever may come your way as possible," he told reporters at Kennedy.

Next week's launch is key moment in Nasa's strategy to change the way it conducts its space activity.

The arrangement with the companies means they can also sell seats in their vehicles to other space agencies, companies or indeed wealthy individuals.

"We are on the cusp of launching American astronauts on American rockets from American soil yet again," explained Nasa Administrator Jim Bridenstine.

"This time we're doing it differently than we've ever done it before. We are partnering with commercial industry with the intent that they would go get customers that are not Nasa, and drive down our costs and increase the access to space."

For the moment, this model only covers flights to a few hundred kilometres above the Earth, to the ISS. But eventually the aim is to extend the concept to operations in deeper space.

In April, Nasa asked three teams to develop ideas for landing its astronauts on the Moon.

Again, this would be a service the agency would purchase.