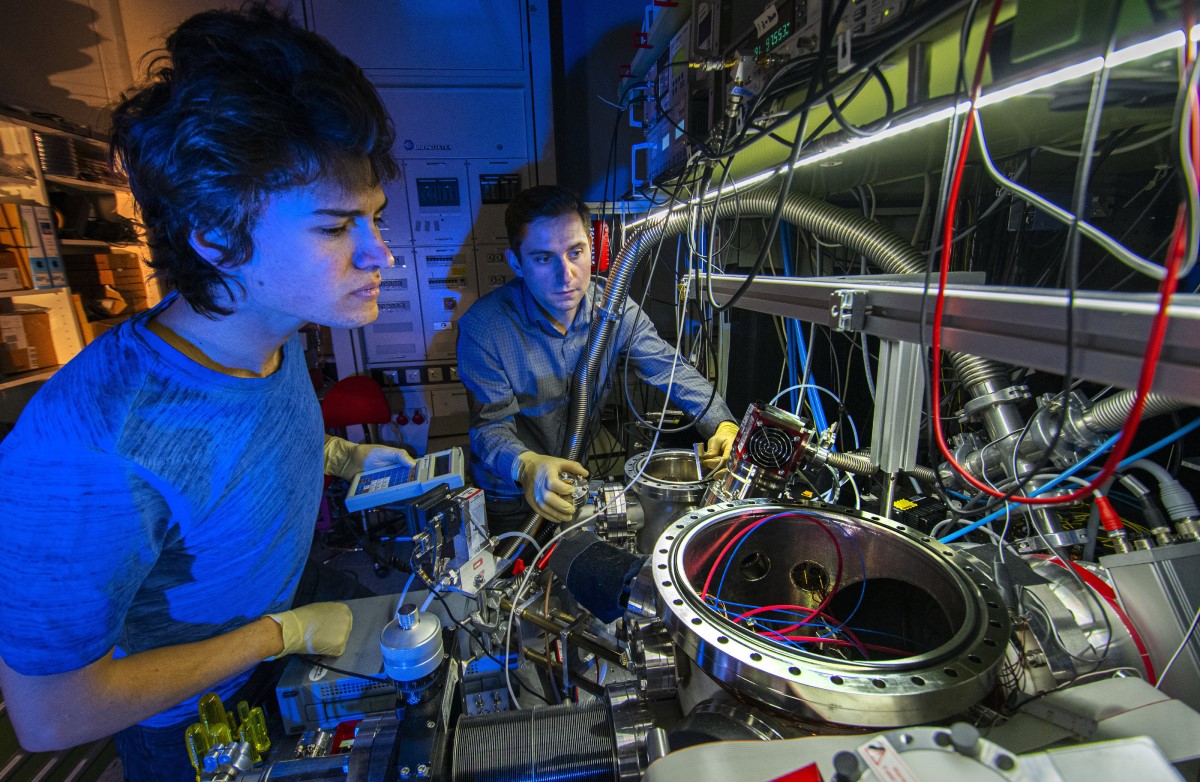 Has the proton radius puzzle been solved at last? - Physics World

A new and extremely precise measurement of the radius of the proton using hydrogen spectroscopy has been made by Thomas Udem, Randolf Pohl and colleagues in at the Max Planck Institute for Quantum Optics (MPQ) in Germany. Their result is similar to a measurement made ten years ago using muonic hydrogen. The muonic result came as a big surprise because it was significantly smaller value than much of the data published previously. But there is still disagreement amongst physicists about whether this latest measurement settles the “proton radius puzzle” in favour of the smaller value.

Spectroscopy can be used to calculate the proton’s charge radius because the energy levels of the hydrogen atom can each be expressed in terms of just two unknown parameters – the proton radius and the Rydberg constant, with the latter providing an energy scale for all of atomic physics. So, just two spectroscopic measurements are required to calculate the radius. Usually these are of the most precisely known energy transition – between levels 1S and 2S – and one other, such as of the Lamb shift (2S-2P).

The proton radius can also be determined by scattering electrons off gaseous or liquid hydrogen and until a decade ago, the results of all experiments agreed with each other. That agreement was expressed in the precise official figure released by the Committee on Data for Science and Technology in 2014, which is 0.8768 ±0.0069 10-15 m, where 10-15 m is a femtometre (fm).

Four years earlier, however, a team including Pohl had obtained a new value using spectroscopy of muonic hydrogen – a hydrogen atom with a muon instead of an electron. This measurement was more precise than previous attempts and well outside the error bars – at 0.84184 ±0.00067 fm. That difference prompted excited speculation that electrons and muons might perhaps experience different interactions with protons. However, the lower number has since been confirmed in ordinary hydrogen – via spectroscopy as well as a scattering experiment carried out at the Thomas Jefferson National Accelerator Facility in the US.

Just to complicate the picture further, researchers from the Sorbonne University and Paris Observatory in France in 2018 reported having measured the 1S-3S transition and obtaining a value in line with the official one. The latest research by Udem’s MPQ team also looks at this transition but comes to the opposite conclusion.

Paris group member Simon Thomas points out that the 1S-3S measurement, in common with those of other transitions from hydrogen’s ground state, is complicated by the need for ultraviolet radiation. The idea is to make hydrogen atoms simultaneously absorb two photons with wavelengths of 205 nm. But generating such short wavelengths involves the use of non-linear crystals or gas targets, which are very inefficient.

Thomas and colleagues used a continuous-wave laser for their experiment, which makes it easier to single out the excitation frequency but results in low output powers. In contrast, Udem’s team has exploited a device known as a frequency comb. This generates a broad spectrum of radiation, consisting of a series of very narrow and equally spaced “teeth”– allowing frequencies to be distinguished from one another. At the same time, this spectral breadth leads to very narrow pulses temporally, which boosts ultraviolet intensities and improves statistics compared with continuous-wave lasers.

As they report in Science, Udem and colleagues at MPQ lowered their statistical uncertainty to just above the minimum level imposed by Heisenberg’s uncertainty principle. They also reduced several systematic effects, including noise introduced by the Doppler shift – which they did by using liquid helium to cool the hydrogen atoms down to a few degrees above absolute zero. Totting up all the possible sources of error, they achieved an accuracy nearly four times better than that of the Paris group.

Taking their new measured value of the 1S-3S frequency – a number consisting of 14 significant figures – Udem and colleagues combined it with a previous measurement they made of the 1S-2S transition. The result is a proton radius of 0.8482 ±0.0038 fm.

Writing a commentary piece to accompany the paper, Wim Ubachs of Vrije Universiteit in Amsterdam, the Netherlands, argues that the latest result has “finally resolved” the proton radius puzzle, which, he adds, “should provide an intriguing topic for historians and sociologists of science”.

The leader of the Proton Radius Experiment (PRad) at Jefferson Lab in the US, Ashot Gasparian of North Carolina A&T State University, agrees that the proton radius puzzle is close to being solved as far as spectroscopic measurements are concerned. But he maintains that the situation is more complex regarding electron-proton scattering, pointing out that his collaboration’s results are only three standard deviations smaller than those from other modern scattering experiments. More accurate experiments are needed to solve the puzzle definitively, he argues, adding that the Jefferson Lab recently approved such an experiment – which, he says, could produce results within three years. For Thomas, in contrast, the 1S-3S data still need to be clarified. While he thinks that the small value of the proton radius is the “more reliable” of the two, he says it is still not completely clear “what kind of systematic effects could have shifted the result” obtained by his group. To that end, he and his colleagues, in common with the MPQ group, are carrying out measurements of the 1S-3S transition in a very slightly different atom – deuterium, which contains a neutron as well as a proton in its nucleus.

Whatever the explanation, he thinks that the chances of there being new physics that dictates different interactions for muons and electrons are slim. That, he points out, is “contrary to what could have been thought when the proton radius puzzle began”.