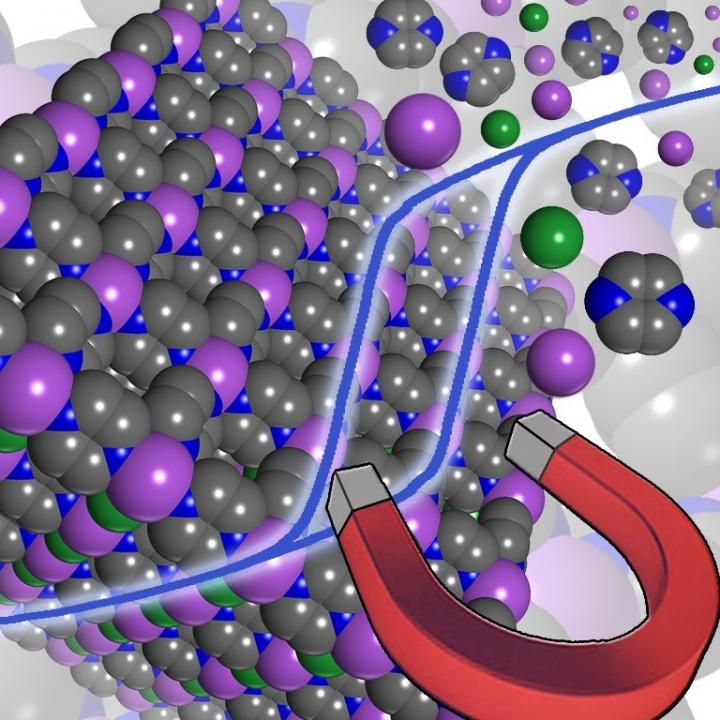 Researchers have shown that certain metal-organic materials can act as permanent magnets at temperatures of up to 242°C, while remaining magnetized in external magnetic fields as strong as 7500 oersteds – 25 times higher than other “molecular magnets” reported previously. Both values are comparable to various purely inorganic magnets available on the market today, suggesting a range of possible applications for magnets made from these lightweight and abundant materials.

Room-temperature magnets are usually made from pure metals, metal oxides or intermetallic compounds. Despite their ubiquity – they are crucial components of data processing and storage devices, electrical motors, renewable energy technologies and more – they suffer from several drawbacks. They are heavy, require a lot of energy to fabricate, and are made from raw materials that are sometimes difficult to source – especially for widely-used rare-earth-based magnets like NdFeB and SmCo.

Magnets made from molecular building blocks such as organic ligands and paramagnetic metal ions are promising alternatives to purely inorganic magnets. As well as having similar magnetic behaviour to that of traditional magnets, their properties can be precisely tailored and optimized post-synthesis thanks to the flexibility of molecular and coordination chemistry, says team leader Rodolphe Clérac of the University of Bordeaux and CNRS in France. Indeed, researchers have already made magnetic structures that have no inorganic equivalent, including single-molecule magnets, single-chain magnets and 2D/3D networks with magnetically ordered phases.

Another advantage of molecule-based magnets is that they have very low densities (around 1 g/cm3) compared to their purely inorganic counterparts, which typically have densities over 5 g/cm3. This makes them attractive for emerging technologies such as magnetoelectronics, magnetic sensing and data storage, even though their maximum energy product – a measure of a magnet’s strength – is much lower. The snag is that most molecule-based magnets made to date can only operate at relatively low temperatures, which prevents them from being used more widely.

To increase the operating temperatures of these magnets, researchers have tried linking radicals (that is, species containing at least one unpaired electron), to metal ions in 2D or 3D coordination networks. The strong magnetic coupling between the free electron spins of the radicals and the metal ion spins produce magnetically ordered phases that boast critical temperatures (that is, the temperature above which a material’s intrinsic magnetic moments cease to be regularly ordered) as high as 400 K in some cases. There is a price to pay, however, in that the room-temperature coercivity (a measure of the magnetic field needed to reduce the magnetization of a ferromagnetic material to zero) of these materials is low – on the order of hundreds of oersteds at best.

Clérac and colleagues have now used coordination chemistry – the combination of metals and ligands at the molecular level – to make a lightweight magnet with an ordering temperature of up to 242°C and a 7500-oersted coercivity at room temperature. The magnet is made by the chemical reduction of pre-assembled coordination networks consisting of metal ions of chromium (an abundant metal) and inexpensive organic molecules known as pyrazines (pyz).

Clérac and colleagues used lithium 1,2–dihydroacenaphthylenide in tetrahydrofuran to reduce two 2D coordination networks, CrCl2(pyz)2 and Cr(OSO2CH3)2(pyz)2. This strategy enhances magnetic interactions between the Cr ions and pyz molecules. Although structurally similar, these two materials have very different physical properties: while Cr(OSO2CH3)2(pyz)2 is antiferromagnetic below 10 K and an insulator, CrCl2(pyz)2 is ferrimagnetic below 55 K and an electrical conductor even at room temperature. The researchers say that their molecule-based metal-organic magnets compare well with traditional inorganic magnets, while also boasting better magnetic properties and a higher critical temperature than previous molecule-based magnets. “The post-synthetic chemical reduction of coordination networks we have demonstrated is a general, simple and effective approach that could allow for the preparation of a new generation of high-temperature lightweight magnets with yet unrealized applications in emergent technologies,” Clérac says.

In the future, members of the team (which also includes researchers from the European Synchrotron Radiation Facility, ESRF), say they plan to develop a completely new family of molecule-based magnets with adjustable properties. “We also hope to find novel materials that could combine magnetic properties with high electrical conductivity at room temperature,” Clérac tells Physics World.

The researchers report their work in Science.