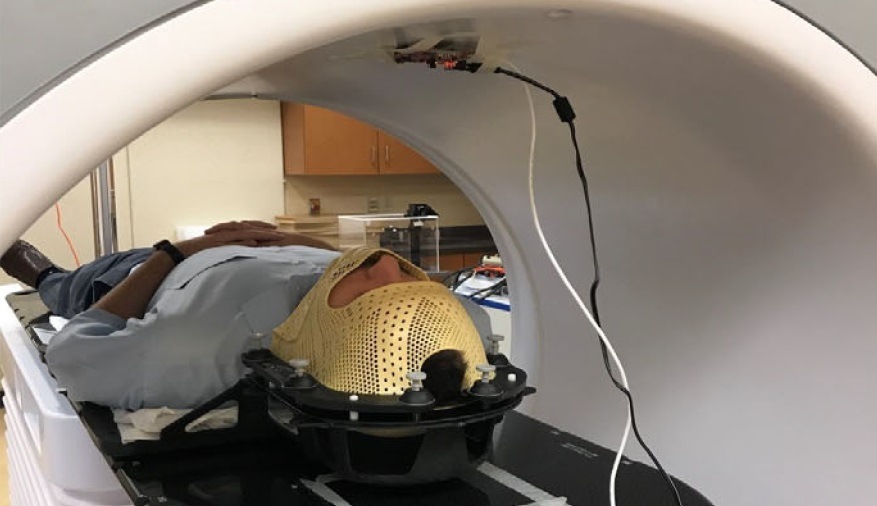 Precision monitoring of patient motion in real-time during radiotherapy could become much easier in the future thanks to millimetre wave (mmWave) technology. According to research from Washington University School of Medicine in St. Louis, mmWave technology can monitor unobstructed surface displacements with an accuracy of 0.1 mm, and better than 1 mm accuracy when monitoring displacements through a radiotherapy immobilization device or a hospital gown. Importantly, the technology is low cost and easy to use (Med. Phys. 10.1002/mp.13980).

Imaging with millimetre waves, which have a frequency range of 30–300 GHz, could overcome limitations of existing techniques for measuring patient motion, such as optical tracking of a patient’s skin surface, fluoroscopy and CT imaging, and real-time position management systems. Optical imaging cannot penetrate clothing or thermoplastic immobilization devices, while CT and fluoroscopy expose patients to additional radiation.

The mmWave device developed by the team can monitor breathing and cardiac motion simultaneously, and can decompose a chest displacement profile into breathing and cardiac waveforms. As such, the technology could also potentially replace respirometers and other breathing monitoring devices that provide signals for respiratory-gated treatments or four-dimensional CT scans.

Joshua Olick-Gibson and colleagues investigated the feasibility of using mmWave technology to track surface motion of a patient during radiation treatment. They conducted measurements with and without obstructions, which included a hospital gown, an alpha cradle, and an immobilization face mask worn at various displacements and heights by a healthy volunteer.

The researchers affixed a mmWave device with two transmitters and four receivers on the inside top bore of a non-rotating linear accelerator, pointed downwards towards a reflective brass plate placed on the treatment couch. The device transmitted chirp signals at 77–81 GHz. The surface is detected by fast Fourier transform of the reflected chirp signal within a rough range bin; fine displacements within that range bin were calculated through phase extraction and phase demodulation.

The researchers measured displacements of 10, 7.5, 5.0, 2.5 and 1.0 mm at table heights of 100, 150 and 200 mm below the machine isocentre. They also examined submillimetre displacements at a height of 200 mm. To obtain breathing and cardiac waveforms, the researchers sent the measurements through two separate bandpass filters and compared them with measurements from a Vernier Respiration Monitor Belt and an electrocardiogram.

The authors were impressed with the mmWave device’s ability to record the volunteer’s facial movements within the immobilization mask. However, they were unable to quantify the movements to verify its accuracy. They note that this will require a study comparing cone-beam CT images of the patient in the same setup.

Other planned research includes measuring the true sensitivity of the mmWave device with respect to sub-0.1 mm displacement, as well as studies using four sensors in the gantry to measure motion in the cross-plane.

“We need to make significant algorithmic improvements to increase the mmWave device’s accuracy on uneven and diffuse surfaces such as skin,” Olick-Gibson, the project’s primary research engineer, tells Physics World. “We have initiated an implementation of a focusing lens and are currently testing its efficacy. We are also exploring optimization and component decomposition algorithms to improve the distance accuracy of the system beyond the current range resolution.” He estimates that this will take approximately a year.

After completing this development work, the team hopes to conduct multi-volunteer clinical trials of the device to demonstrate its efficacy in a clinical environment with a statistically significant sample of subjects. “Ultimately, we hope that our approach using mmWaves will be implemented as a continuous patient motion monitor during radiation therapy,” says Olick-Gibson. “We believe this tool will assist therapists and physicians in delivering more precise radiation therapy that accounts for intra-treatment movement.”