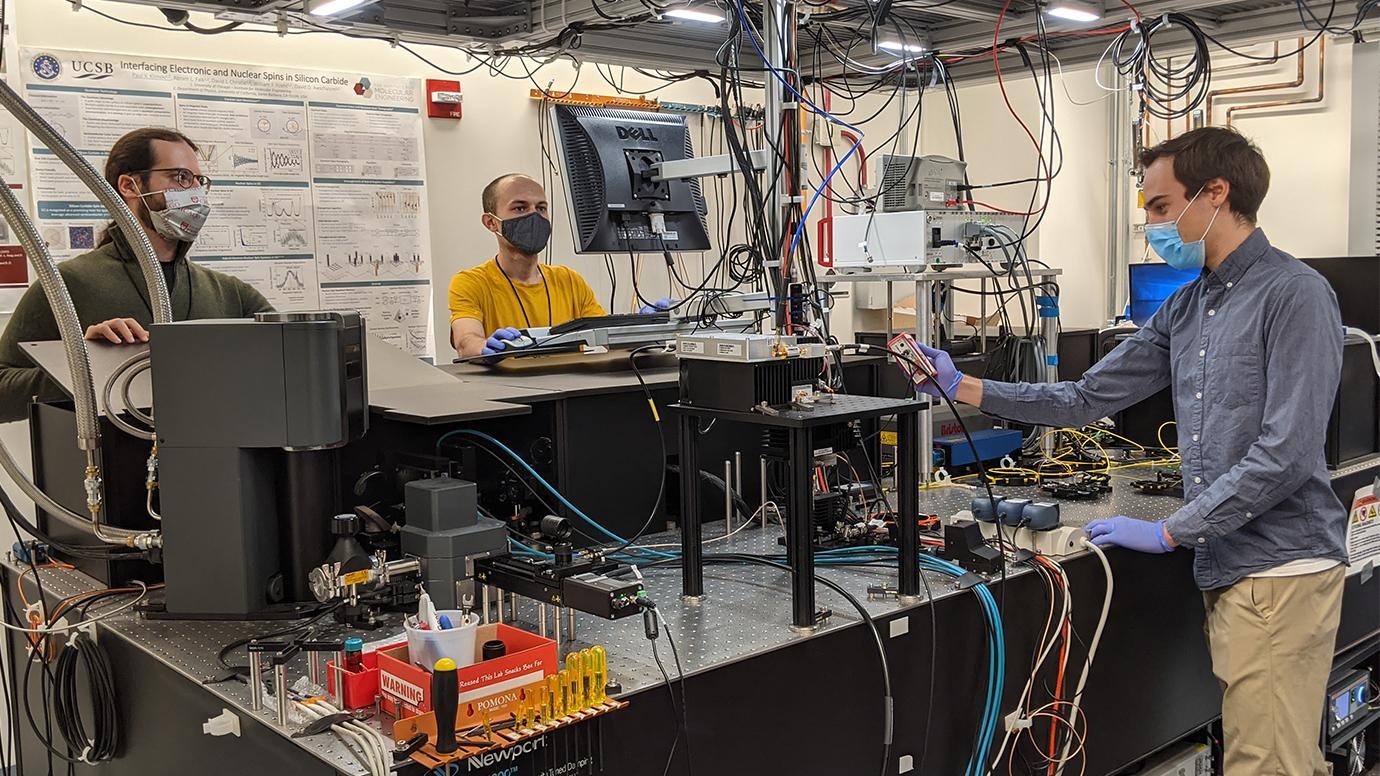 The states of molecular spins in a crystal can be detected optically using the polarization of the photons they emit, researchers in the US have shown. This allowed the team to prepare and precisely read out spin states within molecules – a capability that could be used to engineer quantum bits (qubits) with greater flexibility and control than possible using other platforms.

So far, the most successful platforms for quantum computing have proved to be trapped-ion qubits and superconducting qubits. However, both technologies have significant drawbacks. Ion qubits require high vacuum and electromagnetic traps, whereas superconducting qubits must be made from identical quantum circuits, which are extremely difficult to produce with the required consistency. One possible alternative is the diamond nitrogen-vacancy (NV) centre, which occurs when two adjacent carbon atoms in a diamond lattice are replaced by a single nitrogen atom. Unlike the rest of the carbon lattice, an NV centre has a spin that can be readily manipulated and read out with laser light.

Unfortunately, the process for creating NV centres involves irradiating diamonds before exposing them to nitrogen gas and is difficult to execute precisely. “One of the major challenges to building scaleable solid state quantum systems is being able to place the quantum bit where you like at the atomic scale over the length of a wafer,” explains condensed matter physicist David Awschalom at the University of Chicago.

Awschalom’s group has collaborated with researchers led by chemist Danna Freedman of Northwestern University to focus on a “bottom-up” approach to creating a crystal with appropriate spin centres, Instead of implanting the spin centres into an existing crystal, they take a molecule that contains spin centres and crystallize it. “You take it for granted that every molecule in a tablet of aspirin is identical,” explains Freedman. However, the technological challenge is that that nobody had successfully produced a molecular crystal containing spins that could be manipulated and read by a laser beam.

Now, Awschalom, Freedman and colleagues synthesized three different compounds comprising chromium (IV) ions coordinated to aryl ligands. The resulting samples of organometallic molecules each behaved much like NV centres — albeit at different laser frequencies. “You optically excite the qubit into a state that rapidly relaxes into a metastable state and then emits a photon,” says Awschalom, “From our perspective, the single pulse of light ultimately initializes the system into a state from which it can emit one photon whose polarization reflects the spin of the system. That’s the qubit spin-photon interface.”

This entire process effectively creates a molecular single qubit. At present, the researchers are working with coherent ensembles of qubits, but they are working to achieve single molecule sensitivity becasue single molecular quantum states would have longer coherence times.

The team hopes that, by connecting the output of one qubit into the input of another, it may be possible to build optical quantum gates and then quantum circuits using their system. In the short term, says Awschalom, they plan to make interfaces between their qubits using integrated photonics. A more ambitious, long-term possibility may be to craft photonic highways by chemical self-assembly.

“This opens up a new frontier for what my students like to call designer qubits,” he says, “Now you can imagine so many things that would have been very challenging with other techniques, where you’re limited by the material family…But here, because you’re literally cooking [the material], you can imagine incorporating memories, systems that are designed so that they’re heavily entangled. I think the sky’s the limit here for both computing and sensing.” Freedman adds, “Broadly speaking, quantum information science is a multi-decade challenge. There are a whole host of areas that will be impacted by new materials discoveries, so there’s both a whole lot of work to do and a whole lot of fun to have.”

Commenting on the work, Stephen Hill of the National High Field Magnet Laboratory at Florida State University says, “Molecular materials are very promising as potential qubits for quantum computing but that area lags behind some of the more mature areas partly because some of the key properties have not been demonstrated. This [work] demonstrates one of those key properties. I think the result itself is not a huge surprise – but it’s exciting for the field that it has taken that big jump in actually demonstrating this.”

The research is described in Science.