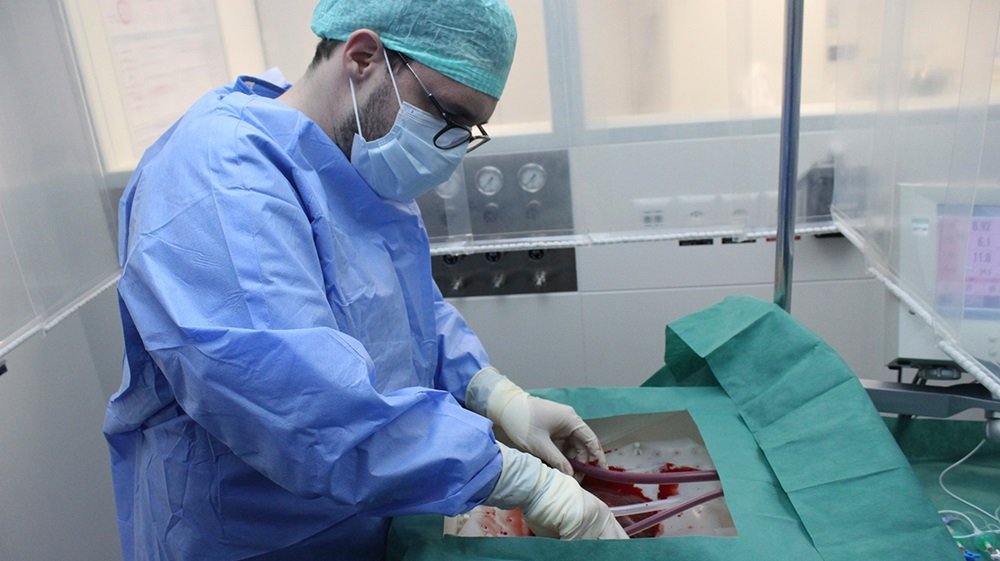 As part of the Liver4Life project, researchers in Zurich have developed a new machine that can keep livers alive outside the body for up to a week. The development of this machine could reduce waiting times for donor organs and improve the lives of thousands of people on organ waiting lists (Nature Biotechnol. 10.1038/s41587-019-0374-x).

Currently, when an organ is removed from a donor it is flushed with a preservation solution and stored on ice. This will keep it in a good condition for up to 12–18 hours whilst it is transferred to the recipient. However, there is a shortage of healthy organs available for donations and waiting lists can be prohibitively long.

To keep donated livers alive for a longer time, perfusion machines can be used. These keep nutrients flowing through the organ to maintain function. Currently, however, such machines can only keep livers viable for 24 hours when operating around normal body temperature. The Liver4Life project set out to extend this time to one week. To do this, the machine replicates conditions in the body by reproducing key functions.

Before trying out their machine with any human livers, the researchers, from University Hospital Zurich, ETH Zurich, Wyss Zurich and the University of Zurich, investigated pig livers. They identified several key functions of the liver that had to be maintained: prevention of red blood cells bursting, glucose metabolism, liver oxygenation, simulation of diaphragm movement and waste removal. All these factors are controlled automatically by the machine, removing the need for physicians to adjust them manually throughout the week.

The machine provides pulsing blood through an artery of the liver, mimicking natural blood supply. This pulsing of the blood flow is essential to prevent red blood cells from bursting, which can damage the liver. Through the blood, the machine delivers nutrients and controls glucose levels and oxygenation, monitoring their levels using a series of sensors.

To remove the waste products produced, the team incorporated a dialysis unit to the machine, which uses an algorithm to automatically adjust the flow and control the concentration of red blood cells.

Finally, in addition to nutrients, the liver also needs to be kept constantly moving to prevent tissue death. To simulate the movement caused by the diaphragm, the team placed a balloon below the liver to create automated movement.

The researchers tested the machine’s effectiveness using 10 poor-quality human livers. After one week, six of the original livers maintained their health, and some even recovered to some extent from any injuries caused by the preservation technique.

“The success of this unique perfusion system – developed over a four-year period by a group of surgeons, biologists and engineers – paves the way for many new applications in transplantation and cancer medicine helping patients with no liver grafts available,” explains senior author Pierre-Alain Clavien.

Extending the window of viability for donated livers could enable poor-quality livers to be repaired for transplant in the future. The next step for the project is to use organs kept alive by the machine for transplant.