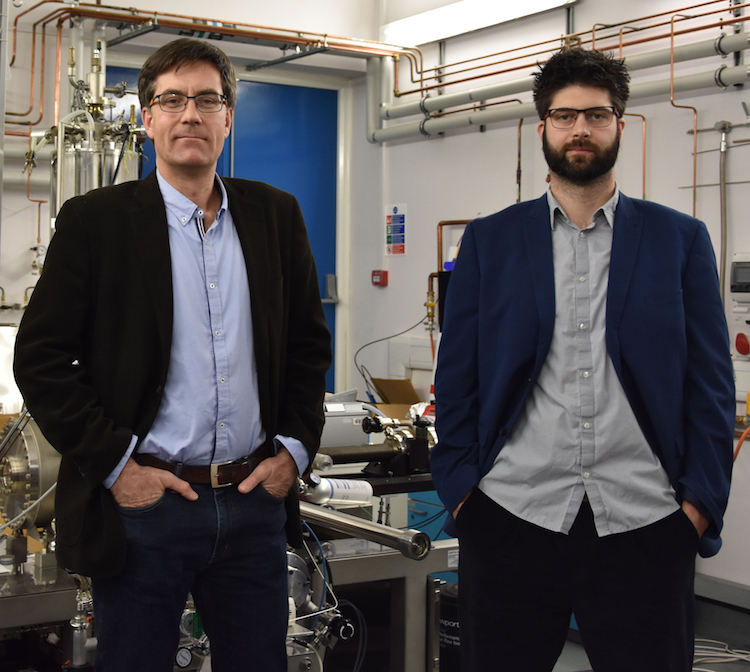 Scanning tunnelling microscopy (STM) is routinely employed to identify individual molecules, but it cannot usually resolve their internal structure. An interdisciplinary team of researchers at the universities of Warwick and Cardiff in the UK has now shown that a variation of high-resolution STM can in fact deliver information about the positions of atoms and bonds within molecules. The technique, which can also determine the types of intermolecular bonds present, could be used in a wide range of fields, including materials science, biochemistry, and pharmaceuticals development and testing.

Invented in 1981, STM is a powerful way of visualizing the nano-world all the way down to its elementary constituents – that is, individual molecules and atoms, explains team leader Giovanni Costantini of Warwick. It works by exploiting the tiny current which, thanks to quantum tunnelling, flows between a very sharp metallic tip and the surface of a sample less than 1 nm away. The intensity of this tunnelling is typically fairly uniform across the molecules in the sample, however, which means that STM cannot usually resolve the internal structure of individual molecules. This is a serious limitation for researchers trying to determine the precise chemical structure of an unknown molecule or ascertain the way molecules interact with one another.

The STM tip in Costantini and colleagues’ new work is equipped with a single carbon monoxide molecule at its end. This molecule is held at liquid helium temperatures of about 1 K, which makes the tip even sharper than usual and chemically much better defined. “We are able to bring the tip extremely close to the molecule being analysed, at a distance where a very strong repulsion (the Pauli repulsion) between the electrons in the molecule and in the last atom of the tip becomes significant,” explains Costantini. “Under these conditions, the current measured in STM depends on the exact location of the tip within the molecule. The resulting images can thus show up intramolecular details, such as the position of the constituent atoms and the bonds between them.”

Halogen bonding is the intermolecular interaction

Costantini and colleagues say their technique allows them to establish that halogen bonding is in fact the intermolecular interaction holding the 3,9-Br2PXX molecules together. Such a result would not be possible using standard STM since the lower resolution images it produces do not distinguish between these two types of bonds.

The researchers also determined that the samples analysed contained impurities. These come from the chemical synthesis process and are often present in such small amounts that they cannot be detected using classical spectroscopic analytical techniques. The HR-STM technique might thus also be used to identify contamination in pharmaceutical compounds with the aim of making them purer in the future, they say.

Once they established the position of the atoms and the type of intermolecular bonds between the 3,9-Br2PXX molecules, Costantini and colleagues could then identify which functional groups of one molecule were interacting with those of another molecule. They could also see how far apart the molecules were and how the supramolecular assemblies were oriented with respect to each other. The main findings, explains Costantini, are that the positive sigma-holes of the Br atoms of one molecule face straight onto the negative O atoms of an adjacent molecule, and that these two non-covalently bound atoms are separated by a distance smaller than the sum of each atom’s van der Waals radius (which is a measure for the size of an atom that is not ionically or covalently bound).

“These two observations perfectly match the definition of a halogen bond as given by the International Union of Pure and Applied Chemistry (IUPAC),” he tells Physics World. “The structural information we obtained from our high-resolution molecular imaging also allowed us to perform several (density functional theory) calculations (in collaboration with Gabriele Sosso’s group at Warwick) that revealed a number of electronic features recognized by IUPAC as further identifying traits of halogen bonding.”

While a very fundamental study, the researchers hope it will be valuable for future work on understanding (bio)molecular recognition and designing novel materials by exploiting non-conventional intermolecular interactions. Indeed, halogen bonding has recently been found to play an important role in the structure of biological macromolecules and in the folding of protein-ligand and DNA structures, says Costantini. The team, who report their work in Nature Communications, now plan to extend their HR-STM technique to study other types of intermolecular interactions, such as pnictogen and chalcogen bonding, and to untangle the interplay between halogen and hydrogen bonding when assembling small molecules for biochemical and materials applications.

“The long-term goal is to take what, at present, is still a niche experimental technique, developed and used in the rather limited research areas of surface- and nano-science, and to transform it into a new and potentially paradigm-shifting analytical tool for the much wider fields of synthetic and biological chemistry, materials science and pharmaceuticals development,” they say.

As an aside, Costantini adds that the three corresponding authors on the study – himself, Sosso, and Davide Bonifazi (formerly at Cardiff, now at the University of Vienna in Austria) – are all originally from Italy. “This is a direct testimony to the significant brain-drain that Italy has experienced in the last 10-20 years and which, unfortunately, today is stronger than ever,” he says. James Lawrence, the paper’s first author and a former PhD student in his group, is now a post-doc at the Donostia International Physics Center in San Sebastián, Spain.