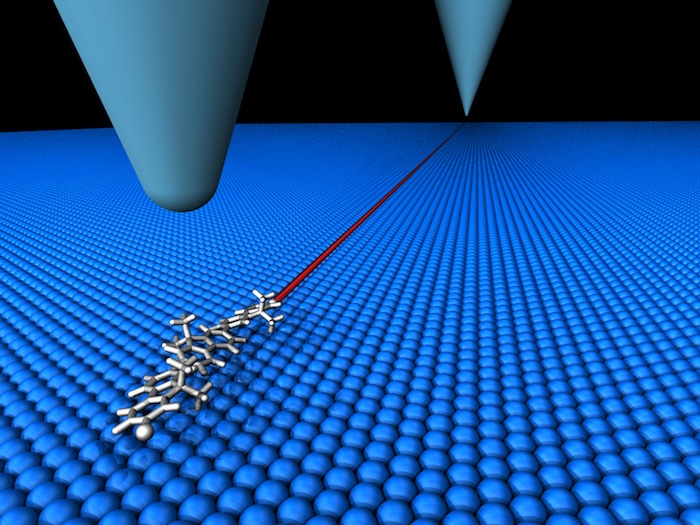 Single molecules keep to the straight and narrow - Physics World

A change in the position of a single molecule can determine the outcome of a chemical reaction, but studying such movements is difficult because molecular motion is random at the atomic scale. Researchers at the University of Graz in Austria, together with colleagues in Germany and the US, have now succeeded in controlling the motion of single organic molecules by using the sharp tip of a scanning tunnelling microscope (STM) to shift them 150 nm along a flat surface.

In the work, researchers led by Leonhard Grill placed dibromoterfluorene (DBTF) molecules on an extremely flat silver surface under ultrahigh vacuum at cryogenic temperatures (7 K). Since the orientation of a molecule on a surface can affect how it diffuses along that surface, Grill and colleagues decided to try rotating individual molecules of DBTF using the sharp tip of the STM. To their surprise, they found that the molecules became extremely mobile when their orientation matched that of a specific atomically close-packed configuration of the silver surface. This increased mobility appears as a bright and smooth “stripe” in the STM images that runs across a single row of atoms over the entire region scanned.

The team then used the STM tip to apply a local electric field to single molecules. They found that the electrostatic forces induced by this field caused the molecules to move along a perfectly straight track, in a direction that depended on whether the electrostatic forces were attractive or repulsive. In this fashion, molecules could be sent or received over distances of up to 150 nm, with a final position that could be controlled within 0.01 nm. The researchers also measured the time required for the molecules to travel this distance, and calculated the speed of a single molecule to be roughly 0.1 mm/s.

In a further experiment, Grill and colleagues created a “sender-receiver” set-up in which they successfully transferred a single molecule between two independent probes – like two people throwing and catching a ball. To do this, the “sender” tip applies a repulsive force to the molecule, which then moves to the exact position of the “receiver” tip. The information encoded within the molecule (such as its elemental composition and atomic arrangement) is thus transmitted, too.

Members of the team, who include researchers from Oak Ridge National Laboratory in the US, the Humboldt-Universität zu Berlin, the Leibniz Institute for Interactive Materials and Aachen University, say they now plan to study how molecular speed correlates with chemical and structural properties. “Such experiments should allow us to determine the kinetic energy and momentum of molecules and help us measure energy dissipation as the molecules diffuse or after they collide with other molecules,” Grill tells Physics World.

Full details of the present research are reported in Science.