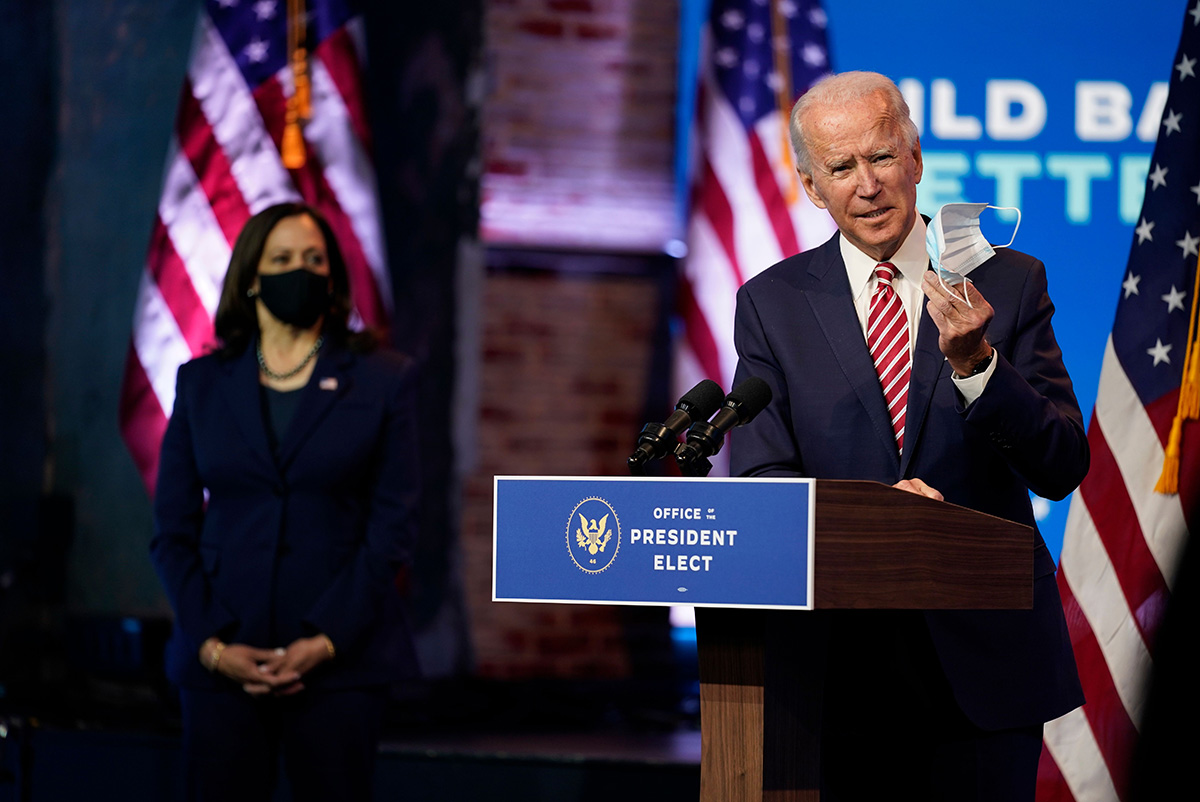 Taken from the December 2020 issue of Physics World, where it appeared under the headline "'Delight' as Biden elected US president". Members of the Institute of Physics can enjoy the full issue via the Physics World app from 1 December.

Physicists welcome the election of Joe Biden as US president but he faces challenges to unite a divided Congress, as Peter Gwynne reports

One of Joe Biden’s first moves as he became US president-elect earlier this month was to appoint a new coronavirus advisory panel. Featuring senior figures such as Vivek Murthy, a former US surgeon general, and David Kessler, a former commissioner of the Food and Drug Administration, the approach brought relief to many and contrasted sharply with the anti-science rhetoric of departing US president Donald Trump. While Biden emphasized that his administration will be “built on a bedrock of science”, the election failed to deliver a convincing majority for the former vice-president, meaning that his science-based agenda could face an uphill battle in Congress.

For many in the US scientific community, however, Biden’s election represents a return to normality that had disappeared during the four years of Donald Trump. “[Physicists] have expressed delight at the election result and look forward to working with the new administration,” says physicist Philip Bucksbaum from Stanford University, who is president of the American Physical Society (APS). That view is backed by Michael Moloney, chief executive of the American Institute of Physics (AIP), who says that many scientists will now be “eager” to serve in the next government.

Yet the prospective benefits of a science-friendly administration face obstacles. In the short term, Trump’s refusal to concede defeat has slowed down exchanges of information necessary for a smooth transition on 20 January, particularly when it comes to containing COVID-19. The Trump administration has also announced fresh appointments and actions intended to continue its policy of emphasizing economics over science. In mid-November, for example, the administration removed Michael Kuperberg from his post overseeing the National Climate Assessment, which provides the basis for regulations on global warming. His intended replacement is the University of Delaware geographer David Legates, who denies anthropogenic climate change.

A longer-term difficulty is the failure of a “blue wave” to emerge during the elections, which Democrats had hoped would give them control of the Senate and increase their majority in the House of Representatives. The party in fact lost seats, although not its majority, in the House, while control of the Senate now depends on run-off elections for two Senate seats in Georgia on 5 January. An unlikely Democratic win in both seats would produce a Senate divided 50–50 giving the deciding vote to vice-president-elect Kamala Harris. But even with that achievement, the administration could face problems pursuing its science-based agenda given that much legislation requires 60 votes in the Senate to move forward.

Biden will have some immediate opportunities to fulfil his vow of relying on science. He has nominated Avril Haines, who has an undergraduate degree in physics from the University of Chicago, as director of national intelligence. His administration is also expected to soon overturn three Trump administration actions by re-joining the Paris climate agreement, the World Health Organization and the Joint Comprehensive Plan of Action on Iran. Biden can achieve those aims with executive orders that do not need Senate approval and he can also renew the START treaty on nuclear-weapons reduction, which expires on 5 February. “Certainly, the physics community is interested in seeing an extension,” adds Bucksbaum.

Hope has also emerged regarding climate change, with insiders seeing signs that some Republican legislators have begun to take a nuanced view of the issue. “The scientific evidence has got stronger and the potential outcomes of climate change scarier,” says former US presidential science adviser Neal Lane, who is a senior fellow in science and technology policy at Rice University. “A lot of Republican senators realize there’s a problem here and that they must find a way to change.” Indeed, Illinois Representative Bill Foster, the only PhD physicist in Congress, adds that Republicans on the House Science Committee – with the approval of House Republican leader Kevin McCarthy – have already proposed doubling the US research budget to help develop technologies to mitigate climate change.

During Trump’s presidency, the Environmental Protections Agency (EPA) overturned several government regulations intended to protect other aspects of the environment such as limits on toxic chemicals in the air and soil, the commercial use of government-owned land and the efficiency of car fleets. Since it used executive orders for several of those actions, the Biden administration can counter with its own orders.

The Biden administration is also expected to quickly overturn Trump’s severe restrictions on immigration. “AIP has been on the record about how limits to immigration negatively impact the scientific enterprise as well as how increasing diversity, accessibility and belonging within the STEM workforce will lead to better scientific outcomes,” says Moloney. Those views are backed by Bucksbaum, who says that the APS is working to persuade the new administration to overturn a Trump proposal that would limit certain overseas students’ visas to two years, rather than the traditional duration sufficient to take individuals through the completion of graduate studies.

As Biden announces nominees for his cabinet, the science community will focus attention on the new presidential science adviser to replace the current incumbent, atmospheric scientist Kelvin Droegemeier. Lane would like to see a woman in the role for the first time and believes it should be a cabinet-level position. “The first science adviser needs to have a good understanding of health issues,” he says. “They should be the key point person in dealing with the pandemic on the ground.” Another open post is NASA boss. In an interview with Aviation Week after the election, current NASA administrator Jim Bridenstine announced he would resign – even if Biden asked him to stay on. A former Oklahoma Congressman who has led the agency since April 2018, Bridenstine overcame initial suspicions about his attitude to climate change and many think he has run NASA smoothly and efficiently such as advancing the schedule for human Moon landings. “He’s managed to work well with both [political] parties,” says Lane, a fellow Oklahoman. “He’s done a good job working with SpaceX and moving toward stronger partnerships with the private sector.”

Whether the rest of the government’s science-based agencies can work as effectively as NASA remains to be seen. Several political pundits assert that Biden is a natural conciliator, whose long service in Congress has gained him the respect of Republican legislators. That could help him to achieve agreement on science-friendly policies. “It will be important for both Republicans and Democrats to focus on bipartisan issues,” says Bucksbaum. “Science can then return to the historical position of being something that everybody likes.”

The American Physical Society (APS) has sharpened its criteria when choosing the locations in which to hold future meetings, saying it will ask the leadership of possible cities to report on local policing policies and related demographic issues.

The society will, in particular, examine statistics on the use of force by the local police; policies on police use of strangleholds and other methods of restraint; as well as the status of investigations into the deaths of individuals in police custody. Candidate cities will be expected to train all their police in de-escalation methods; have evaluations of policing performance that include shootings and deaths of unarmed individuals by police officers; as well as have “a well-defined plan and timetable for improving local policing practices”.

The policy has been introduced following the use of excessive force by the police, particularly against members of under-represented or minority groups. “We became aware that members of our community are vulnerable in ways we had never imagined, and we resolved to act,” says Susan Gardner of the University of Kentucky, who chairs the APS’s committee on scientific meetings. APS president Philip Bucksbaum of Stanford University told Physics World that the membership has been the motivation for the move. “We hear loud and clear that our members see that they shouldn’t have to go to meetings in cities where they feel unsafe and threatened,” he says.