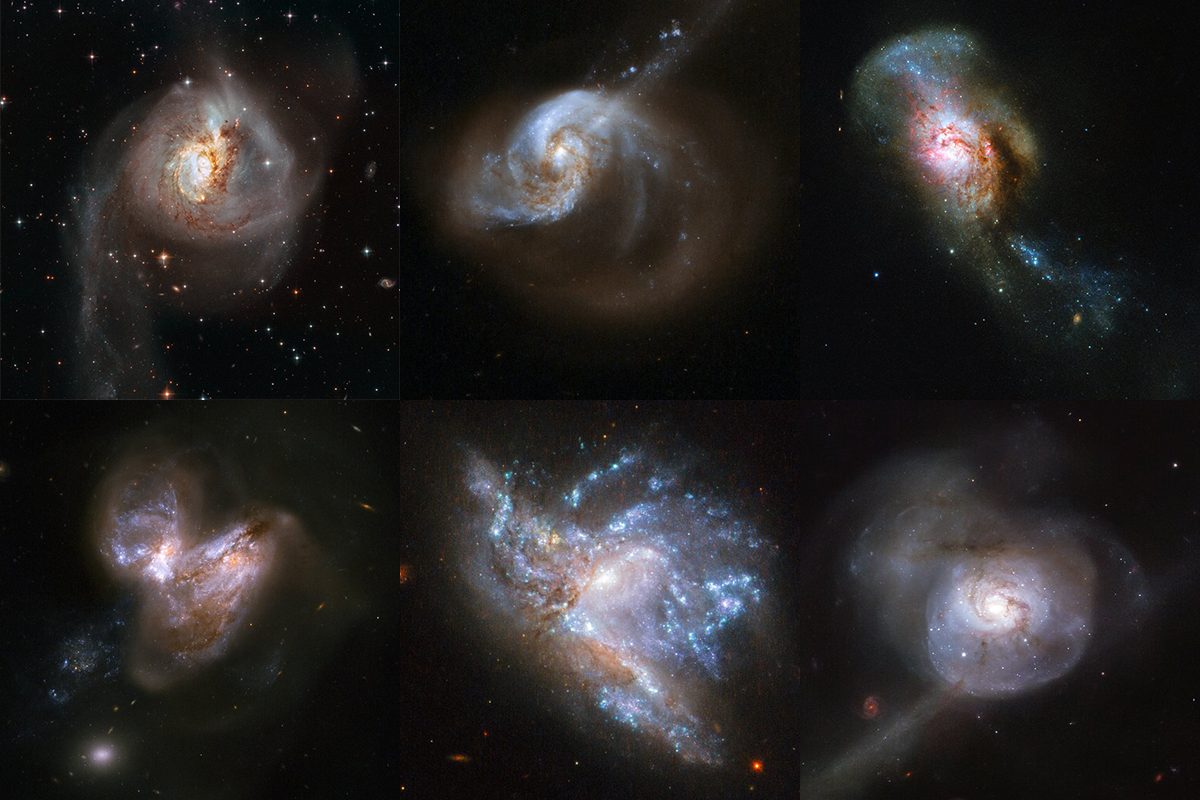 GALAXIES AND THEIR COLLISIONS

Looking out into the cosmos, we see beautiful galaxies-giant assembles of stars like our sun. The image of Andromeda, our largest neighboring galaxy. Andromeda is a classic Spiral galaxy and is somewhat larger and more massive than our own Milky Way. It is also the largest and most distant object visible to the naked eye. Andromeda is estimated to have a mass of 700 billion Msun and to contain a trillion stars. It is 2 ½ million light-years away and is moving toward us at over 250,000 mph. Andromeda and our galaxy, the Milky Way, will collide in about 3 billion years, and will merge over the following few billion years to form a single, very massive galaxy.

While stars are generally very far apart compared to their size, the distance between galaxies is often only a few times their diameters. Thus galactic collisions and merges are common. That’s how the big galaxies get big. The Milky Way may have absorbed several dozen small galaxies to reach its current status-the second-largest behemoth in the Local group of about 30 galaxies. As with stars, there are far more small galaxies than large ones.

When galaxies collide, they can pass completely through one another without any of their stars colliding. This is because there is so much empty space between stars. The nearest star to our Sun is over 4 light-years away-30 million solar diameters. If people were spaced in the same proportion, there would only be one human on Earth. If a star from Andromeda were to pass through our neighborhood, the probability of the sun being hit is about the same as the probability of you being hit by the next meteor to land on Earth. Of course, there would not be just one Andromeda star passing through; there could be billions of them. Still, the odds of the Sun being hit are very low.

While star-on-star collisions are unlikely, the gravitational shock of immense, fast-moving galaxies will wreak havoc on the peaceful, stable orbits of stars in both galaxies. Vast numbers of stars will be thrown out into the great beyond, while other stars will be flung into super-massive black holes.

There will be enormous starbursts, vast numbers of new stars created by the gravitational shock of the galactic collision, as well as a tremendous increase in extremely violent events such as supernovae and radiation from accretion disks. An example of this is shown in the large blue areas in the colliding Mice Galaxies. Blue light comes from very massive, young stars that shine brilliantly are short-lived, and die violently.

The image shows the stunning aftermath of another galactic close encounter. Galaxies M81 and M82 are 150,000 light-years apart and 12 million light-years from us. They are locked in a gravitational embrace that periodically brings them close together, setting off spectacular fireworks as seen in M82, the Cigar Galaxy, In addition to starburst, the Cigar Galaxy displays light from polycyclic aromatic hydrocarbons (PAHs). PAHs are possible building blocks for the most basic forms of life, although they are considered carcinogenic for humans.

This image shows a remarkable NASA/Caltech reconstruction of what we think our galaxy looks like from the outside based on what ewe observe from the inside. The Milky Way is a barred spiral galaxy, with a central bar connected to two major spiral arms, each with several spurs. It is 100,000 light-years across and Earth is perfectly situated 27,000 light-years from its center. The Milky Way has a mass of 600 billion Msun, somewhat less than Andromeda.

As we see that galaxies come in a wide variety of sizes and shapes.

The largest galaxies are often elliptical galaxies, such as the galaxy on the above image. These are oval-shaped, lacking disks and spiral arms. Elliptical are thought to be older galaxies that formed from the merger of numerous smaller galaxies. Many of these very distant celestial objects were first identified by American astronomer George Ogden Abell, who began his career as a tour guide at Griffith Observatory. He did both his undergraduate and graduate studies at Caltech, and ultimately became chairman of the Astronomy Department at UCLA. Abell is best known for his catalog of galaxy clusters, first published in 1958.