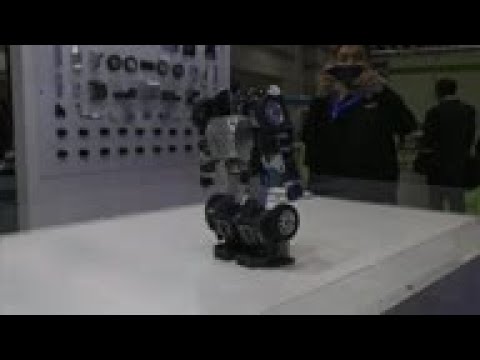 (18 Dec 2019) LEAD IN: It bills itself as the world's largest trade fair focussing on robotics, and this year the spotlight at "iREX" in Tokyo is on robots that will make the world a friendlier place. From aiding humans in space, to teaching us how to play better ping pong, it seems the robots of 2019 really just want to help. STORY-LINE: From humanoid-like robots that quickly transform into cars, to four-legged devices that roll-over and sit, this year's iREX exhibition has many of the devices we've become used to from sci-fi. But amid all the gadgetry this year, the expo's theme is clear: making robots that will help humans bridge the pathway to a "friendlier society". The iREX, or International Robot Exhibition, is held in Japan biennially, and brings together all things robotic. It's put on by the Japan Robot Association, and the Nikkan Kogyo Shimbun, one of Japan's biggest publishers. At the "Omron" robotics company's booth, there's a robot ready for play. "Forpheus" is a large, ping pong-playing robot designed to demonstrate what its manufacturers call the future of "integration between people and machines". It's equipped with state-of-the-art sensing equipment which allows it to detect the movements of the human player, their paddle, and the ping pong ball simultaneously. It does all this at high speeds, and with a high degree of accuracy. "This robot's specialty is that while it's rallying with a player, it's able to use AI (Artificial Intelligence) and sensing to determine the player's skill level, or what they may want to work on," explains Satoshi Yase, an Omron Corporation engineer. "In the case of human-machine interaction, I think we can really expand on the development of how robots sense the condition of the player, and how we can receive feedback when it's playing against someone." Forpheus, he adds, is also equipped with an arm that can easily mimic the actions of real players, such as cutting the ball, or adding spin. And, on top of this, the robot plays on a table with a digital screen "net" that displays the skill level that Forpheus is playing at, along with the speed of the ball and how fast the ball is spinning. Another evolving technology is on display nearby, at the Kawasaki booth. This year, the company is demonstrating "Kaleido", a humanoid robot standing 184 centimetres tall and weighing 85 kilograms, which is built to travel to places humans cannot. According to Associate Officer Toshiya Okuma, the robot is in its 6th generation, with the 4th iteration having been displayed at iREX in 2017. He explains that Kaleido is made to be sturdy and easy to repair, and is part of various robotics programmes at several Japanese universities. He foresees many future applications. "This robot is made to be used anywhere that may be dangerous for a human to go. For example, if there's a tsunami or some kind of natural disaster, or a fire. Looking further ahead, it could be used in space or in deep-sea exploration. It can go anywhere in place of a human," he explains. By making the robot in humanoid form, it's able to use existing equipment and tools that humans use, negating the need for specialised equipment and widely expanding the roles that the robot can take. While "Kaleido" has a focus of going places inaccessible to humans, another robot - this time made by Panasonic - is aimed at improving human access. The company's new mobile accessibility chair is named "WHILL NEXT". One of the main targets for WHILL NEXT's usage is airports. Find out more about AP Archive: http://www.aparchive.com/HowWeWork Twitter: https://twitter.com/AP_Archive Facebook: https://www.facebook.com/APArchives Google+: https://plus.google.com/b/102011028589719587178/+APArchive​ Tumblr: https://aparchives.tumblr.com/​​ Instagram: https://www.instagram.com/APNews/ You can license this story through AP Archive: http://www.aparchive.com/metadata/youtube/2db56312b33045ea9122add35cdbe889